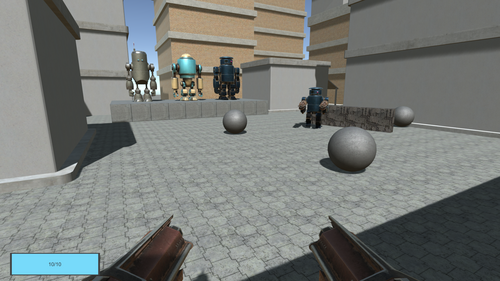 Finally km0 has some GFXs and SFXs! Thanks to the time I spent for #devember now there's in place a basic system to view and hear some feedbacks of the weapons shots and hits. Sounds have only a pitch variation. I would like to have a dynamic composition of SFXs, but it requires to have many samples, that now I don't have. As of now there are 3 SFXs: the gun shooting, the concrete hit and the robot hit. The gun shooting is... well, me saying "pew", with a noise removal filter on it. The other two I made mixing and cutting various public domain sounds from freesound.org. I'm sufficiently ok with the concrete one, but I'm still dubious about the robot hit.
The effects are only in the multiplayer build for now.